The independence-loving and resourceful character of the Rat is combined with the involvement and mysteriousness of the Scorpio, to result in a charming and addictive personality, autonomous in most life aspects but with a great ability to manipulate others in following them.

The Scorpio Rat prefers to remain surrounded by an air of mystery and will rarely open up, their hidden ambitions are only revealed through their actions. 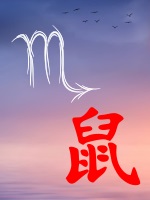 Because these natives are so inclined towards only doing what they want, it is very hard to keep them fixed.  Leaders most often and rarely followers, the Scorpio Rat people will often take control of a situation, even when they are not completely sure of what is going on.

Their determination and their ability to swiftly make judgment of a situation are almost magnetic for those around. They are often taken as example.

Easy going most times, they will open up to those around and are definitely not secretive of their plans. They are so sure that they are going to achieve them so what reason should they have to keep them hidden.

The only moments when these people may be slightly hesitant are when they depend on others a lot, something which, by the way, they very much hate.

Not willing to accept the mundane for too long, the Scorpio Rat won’t stay in one place for too long as they either get bored or are presented with a new opportunity that they weren’t even looking for.

These people are lucky like this, perhaps because they maintain very good relationships with those they meet in their work and outside of it and are quick to react to any chances.

Taking pride in their appearance, these people will be inclined towards amassing material goods, especially clothes. You want to be on their good side, go shopping with them and you’ll uncover a humorous and aesthetically pleasing individual.

Don’t you dear challenge the Scorpio Rat, especially about past matters because their memory is simply invincible and the fact that they are also very investigative, can only make matters worse for you, should you try to be dishonest with them.

Although very social beings, their home is still their kingdom, the place where they find solace even during the hardest of times.

They will likely be criticised for being too harsh and extremely blunt. They make great art critics and perhaps even judges, with their ability to scrutiny others.

Domineering when they feel threatened, the Scorpio Rat is most often impatient when it feels that they are likely to lose control of a situation. They will not raise their voice at you but you will feel that they are in an agitated state.

The Scorpio Rat devotes whole-heartedly to their partner and will only settle when they feel is right. This could be during their very young years or later in life. They may be in a hurry with other life aspects but definitely not with love.

They are not the ones to lose valuable energy chasing flings and will likely disregard those who are proposing this to them. Valuing loyalty above anything else, the Scorpio Rat will literally explode, should they be betrayed emotionally. Their grudge will be forever and they may even turn against the one who hurt them, with a vengeance.

As most of these people are fashionable and elegant, they naturally attract attention wherever they go so they may often find themselves courted. In a relationship, their chameleonic personality will be revealed, as they can be very passionate one moment and disregard any consequences and then the next second, they can turn into a  very cautious and responsible partner.

Most compatible with: Cancer or Virgo Ox, Capricorn or Pisces Dragon, Virgo or Capricorn Monkey.

An assertive and strong woman with high aspirations in life. She is friendly and empathic but will not make friends easily. Building her trust up is hard work and not all are deemed good enough for this.

Sometimes quick tempered, this woman is impatient and very demanding. She may refrain from showing emotions out of fear that she will be regarded as weak or needy. Traditionalistic in her family approach, she is an innate nurturer and appears to be more tolerant of strangers than of her own.

This is a man who treasures stability and security above all and who is a natural born protector of those around. His tendencies are rather conservatory and he will abide by his life principles no matter what. This is why he will definitely build a reputation of stubbornness amongst his closest.

Believing that he is the only creator of his destiny, he will take action at the right time, sometimes mentoring others as well. He is bold and impatient at times but his usual persistence tilts the balance in the right direction.

The Scorpio Rat man is looking for an unusual partner who can keep their interest alive but once he is settled down, his expectations will also veer, towards different demands of trustworthiness and loyalty.

Insightful Analyses Into What It Means To Be A Scorpio