When the inquisitiveness of the Rat meets the versatile nature of the Pisces, a most charming personality is born, one who is witty and a quick thinker, one who is not afraid to take chances nor to exploit opportunities.

The duality of the Pisces is moderated by the meticulousness and determination of the Rat. Suddenly, it’s not all about feelings but also about achievements. The Pisces Rat has a balanced character that can rapidly switch between sentimentalism and a practical reaction. 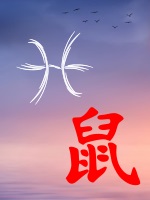 Beware as these people often take life very seriously. They are one of the most dependable people you can meet although they also have this rush for adrenaline inside them.

Lovers of the arts and crafts, some Pisces Rats can show amazing talent.

With their feet snugly fixed to the ground, they are not easy to impress and will balance all the pros and cons of a situation. They are compassionate but they cannot be taken as fools.

They are nostalgic but will not live in the past and will actually reprimand their closest for doing so. The Pisces Rat will likely ace any memory test and is the first to remember birthdays and other special events.

Neat and extremely well organized, these are your perfect people for organizing events, as they are very keen to keep into consideration what everyone wants and they are definitely crowd pleasers.

Not big fans themselves of big social gatherings, they will most likely prefer to watch the whole thing from the shadows. Their relaxation method of choice will of course include a quiet resort or at least the calm and piece of their homes, when no one is around. Lovers of the arts, they will be drawn to literature and movies, often becoming critics of art, more or less formally recognized.

Going back to where we mentioned their compassion, it needs to be noted that not the same can be said for people doing anything wrong to them. On the same measure of how gentle and caring they are, they can also act with a vengeance.

Provoke them without any reason and you will be their newest least favourite person. Click To Tweet

They also write off people from their circle of friends after the first indiscretion, as they take great pride in not being nosy or gossipy and demand the same of their closest. Offended by other people’s words and taking everything personally, would be an understatement in describing them.

Some may say that this is too much but knowing the emotional balance of the Pisces Rat, you would understand that these people are all about good karma and don’t want to hurt anybody, they in fact, teach their peers some very important life lessons through their actions.

Lucky in love is a rather movable concept for these people as one day they may think that a simple relationship in which the two partners give themselves enough space, is perfect for them whilst the second day they could say that this is not enough and doesn’t show real commitment.

They are attracted to people who are just as versatile as them and who can keep up with their eccentric ideas. Passionate in the bedroom and outside of it, they are not afraid to speak out what they want.

On the other hand, you can also easily irritate them and get on their nerves, first of all by being too slow to respond to their reactions and second of all by sort of appearing that you are giving your friend or family more attention than you are giving to them.

Most compatible with: Taurus or Scorpio Ox, Capricorn or Cancer Dragon and Scorpio Monkey.

The eyes of this woman are cheerful and penetrating and one cannot shy away from her charm. She is one of the most composed and harmonious people and can make everyone feel at ease in her company.

Deep inside, she is very determined and an incredibly hard worker, she will however, balance all aspects of her life so her family doesn’t have to suffer because of her professional ambitions and neither the other way around.

The Pisces Rat woman can easily fall nostalgic and may sometimes choose to live in the past, especially when she feels that she is in a routine that she cannot break free from.

She is sensible to criticism but luckily, there won’t be many occasions in her life when to be faced with this.

This is a man with a highly versatile personality, who can at one point crave stability and comfort and in the next, leave like a storm on the greatest adventure of his life.

Intuitive and thoughtful, he will channel his attention on the future rather than the past, although he will also learn from past mistakes. He is bright and charming and often comes up with innovative ideas. However, he will put very little of these in practice because he is also a bit lazy and can get bored easily.

The Pisces Rat man is not afraid to take the long road, especially if he can be accompanied by his significant other. He is fair and trustworthy and once he promises something, he will keep his word no matter what.

Insightful Analyses Into What It Means To Be A Pisces