The Libra Rat takes a lot from the charm of the Rat and its assertive but calming personality. Put on top of this the balanced and cautious nature of those born under the Libra zodiac sign and you will obtain a tactful, witty and incredibly adaptable personality.

The Rat’s practicality and sense of control will tone down the innate wariness of the Libra. These people are not afraid of a big crowd and tend to be very attentive with how they present themselves to the world. 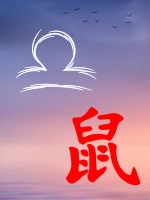 With their composed aura, you wouldn’t necessarily be able to tell that the Libra Rat also has an amazingly joyful disposition. These people are very sociable and know how to have fun.

Fine communicators, they will often take upon themselves to battle for the principles of others. They are impartial and know to recognize bias so they will always be supportive of causes that are genuine.

Being able to see both sides of a situation, they will endeavour to find solutions that fit everyone, especially if this is how they get a chance to practice their problem-solving attitude.

Although these people may appear quiet, they have so much to say. They have very high ambitions in life but will only share those with people who are really close to them. They seek perfection and won’t settle for anything less.

Because their minds are always so active, their only way to escape their daily worries is by engaging in new activities, perhaps even sports. They may find that they enjoy traveling and their life could potentially change for the better, once they take on this habit.

Their ideas will fascinate people and so their self-confidence will be built. A great listener, the Libra Rat is very tactful about the feedback it provides. Their progressive thinking is not always easy to understand and they may appear as harsh and detached. On the other hand, because they want to feel part of the group and stick to the norm, some people will not use their intellectual abilities at maximum.

Little manipulators, they are great at planning and plotting and their unassuming personalities very much help with this. Although not very often, they are known to try to tilt the balance in their favour and they take advantage that they are often the least suspected of doing this.

They are very efficient in business, whether this means trading themselves or offering consultancy services. They may sometimes get carried away and start more plans than they can handle at once.

Their charm also helps them get away with a few shortfalls. One of their very well-hidden weaknesses is their laziness.

You wouldn’t say it but yes, they need a lot of self-motivation to do something so they lead a constant battle inside them.

They may also be greedy at times, in the sense that they will prefer to keep something for themselves, just because there is no one at an arm’s length that would need it.

They are very talented at storytelling and this can sometimes veer towards a negative side, totally unintentionally. But we should also give them credit for keeping under control this rather plaguing weakness: gossiping.

The Libra Rat will take relationships very seriously and will most often try to commit for a lifetime. They make fascinating, selfless and considerate lovers.

They don’t have time to play around and the worst you can do to them is lead them on and then betray their expectations. These people are very romantic and loyal.

Because they invest everything in a relationship, if things don’t go to plan and a break-up takes place, it takes them a while to pick themselves up and to rebuild their life, in the sense that there are a lot of things they put on pause or as second priority, when in love.

Because they benefit from a steady emotional nature, the Libra Rat doesn’t act on impulse and will unlikely fall in love at a first sight. Their charismatic and attractive nature may have others fall for them instantaneously though.

Most compatible with: Gemini or Leo Monkey, Sagittarius or Aquarius Dragon, Aries or Leo Ox.

A woman of contradictory nature, she is strong, talkative and direct. Persistent and eloquent she finds it easy to convince others to follow her lead. She is sometimes difficult to understand, especially when deciding to act impulsively and put her emotions first.

Caring and generous, she is likely to build a big family, but usually later in life as she will take full advantage of her young years.

The Libra Rat woman is adventurous and has an eye for other people, to then later discover that they share the same passions. In her career, she is either climbing all ranks very fast or preferring to freelance and be her own boss all the time.

A great companion and a generous friend, this man will pursue financial stability from early in life. He is interested in the luxuries life has to offer but will not shy away from investing both his money and time in humanitarian endeavours.

Ambition comes first in life, meaning that he can sometimes bend his strong life principles, in order to achieve what his heart craves. His view of the world is often referred to and he is one of those people who are greatly regarded, in their chosen field.

The Libra Rat man makes a responsible family man and he is very logical in his decisions, especially when they are prone to impacting the entire family. An intuitive business man, he will read situations early on and if anything, he will be the one leading people on, not the other way around.

Insightful Analyses Into What It Means To Be A Libra