When the Chinese Rat combines with the Western zodiac sign of the Capricorn, bossiness and meticulousness will surface. This is a personality characterized by intelligence, persistence and witty humour.

The Capricorn Rat is a justice seeker, not judgmental or biased, but surely with great expectations of those around. Their aspirations in life cannot ever be deemed as unrealistic as these people know themselves very well and can objectively analyse what they can and what they can’t achieve. 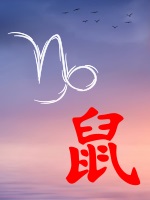 The optimistic approach of these people is one to be appreciated and one that takes them through the hardest moments in life.

They are the perfect combination between the fearlessness of someone who knows they have nothing to lose and the prudence of someone who’s been through a lot in life.

They often end up in positions where they act as referees, probably because of a lot of people sensing that they show a balanced point of view.

They can be very harsh with you when you have done something wrong and very supportive of you when you keep your direction. Eventually, they are amazing at keeping the piece and will often times act as conciliators. They can surprisingly bring reason to even the rowdiest opponent.

The Capricorn Rat won’t let himself dragged down by mundane worries, on the contrary, will kick them in corner to later sort them out.

They are adept at crafting the right words for any situation and they can easily switch from talking to a stubborn toddler to engaging in a serious conversation with a university professor.

Not enjoying being on their own, the Capricorn Rat will gather a close circle of trustworthy friends. These people can sometimes be seen as self-sufficient, but only when they need to invest a certain amount of time to a personal endeavour. Otherwise, their friends know everything that is happening in their lives.

A generous and humanitarian personality, they are inclined towards occupations that at least contain a bit of “saving the world”. They don’t like to invest time in tasks that are meaningless so they will not resist too much in a bureaucratic position.

Innate hoarders, these natives will cling to anything that triggers the smallest of memories. They like to gather souvenirs from the places they travel to and may come across some tensions in their relationships, should they decide (rather likely) to keep anything pertaining to old lovers.

A bit too self-conscious for their own good, these people may be subject to some periods of melancholia and self-doubt. This is usually when their closest friends show how loyal they are, by lifting their spirits.

Not one to skirt around anything, the Capricorn Rat will say it as it is, even to people who, in their job, may be in a higher hierarchy to them.

We need a disclaimer here as you cannot ever expect the Capricorn Rat to read your mind. They are capable of a lot of perseverance and passion in love, they are loyal and dependable but at times, they are just slow to understand what one is expecting of them.

They will gift you functional items because this is what they appreciate in return but may not understand that sometimes, flowers or chocolates have their charm.

Sometime manipulative, they will play with their partner’s nerves, especially after instances where they have been criticised. The good news is that this is just a harmless game that they play.

Another credit to them is that, despite their lack of sensibility to love signals, they are open to sharing how they feel, subject to being asked the right questions or prompted the right way. They will not hide their emotions and they are not ashamed of who they are and what they feel, even from the early stages of a relationship.

Most compatible with: Taurus or Virgo Ox, Pisces Monkey, Leo or Scorpio Dragon.

This woman has an adaptable and attentive personality who is always ready to jump to the rescue of those dear. Her work appears to be so effortless and she is often praise for how well she comes across to other people. Not shying away from the cameras, life may take her to a position where she will influence a large number of people.

Seeking harmony in both private and professional life, she is often cheerful and has a good word for everyone. She is not one to hold a grudge, no matter what had happened.

The Capricorn rat woman has a pleasant character so will be courted numerous occasions in her life. She is calculated in love and sometimes will overthink things that may come more naturally to others.

Assertive and determined, these men sometimes appear as full of contradictions. They tend to change their minds really fast but will never leave anyone behind.

A born idealist, he refuses to believe that some things are simply not possible and will fight for his dreams. Calm and optimistic he appears to take whatever life has to offer with enthusiasm and his attitude can be contagious for those around.

He needs to spend more time in his own company and understand the sources of his likes and dislikes as he is sometimes too focused on the consequences and risks losing track of the causes.

The Capricorn Rat man is always reliable and punctual and often regarded as the good guy. In love, he will try to break away from this and may portray a more macho attitude, one that verges on possessiveness and aggressiveness.

Insightful Analyses Into What It Means To Be A Capricorn