Rat, the first symbol of the Chinese Zodiac, is an animal that portrays ingenuity and resourcefulness, the ability to come in front of the line no matter what.

So, you can easily imagine what an auspicious combination the Aries Rat is for those born under Aries, which is also the first zodiac sign, but at the forefront of the Western Astrology. 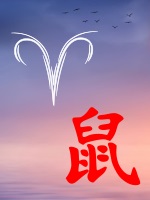 The Aries Rat appears to have entrepreneurial spirit, possess a great imagination and a sharpness of mind that is not always encountered in other characters.

Being super-efficient, these people are not afraid to jump on board any endeavours and are very enthusiastic in their approach.

Appearing a little unemotional and perhaps aloof, these people distance themselves from others, perhaps in an attempt to protect themselves.

As strong self-governing personalities, they are not going to take your words for what they are and cannot be told what to do.

They are self-reliant from an early age and prefer to do things their own way. This also means that they enjoy spending time on their own, however, they don’t reject the company of others, especially on celebratory occasions.

The Aries Rat most likely enjoys sports and in their early years may go travelling, as a way to expand their horizon. They are attracted to anything new and controversial and will often bring such aspects in their day to day lives, surprising their families and friends.

These people are inventive and resourceful so they will always be attracted to improving their homes by getting their own hands dirty. They are great at visualizing changes and how they want things to look.

As a great problem solver, an Aries Rat will use their sharp mind to overcome any obstacles life puts in the way and to acquire all that they desire.

The Aries Rat can be charming and attractive and very goal oriented but at the same time, showing mercy and a tendency to mentor those close.

With their brains in constant activity, these people find it hard to zone out and will take a while to relax. They can be very critical and quick tempered.

Don’t you dare stand against an Aries Rat when they are tired because they are not best at keeping self-control, especially when overworked.

Otherwise, they are composed people and with time, they learn not to let stress build up and stop taking it out on those around. Their patience can sometimes be numbered and they surely hate wasting time.

Decision making is a lot more planned than in the case of other Arieses, born under the rest of the Chinese signs. A lot of time is invested and patterns and coincidences are also interpreted.

This person will always take time to evaluate people and situations, although at times, they may have a decision ready at a glance.

Finding their soul mate is not necessarily their life goal and they may even put off making decisions in this life aspect, for when they consider they have attained other life goals, which they consider more important.

Deep inside, there is another reason for this too, they believe in love at first sight and they can be very passionate about their feelings, of course, in the company of the right person.

When in the right relationship, they put their partners above anything else and offer unconditional support.

Luckier in love than most signs, they are blessed not to suffer from many problems in love. They may be more reckless when young and start relationships our of impulse but when growing older, their responsibilities are put on the first place.

A confident woman, aware of her qualities and how special she is. Highly perceptive, demanding and free, she will often change her mind and expectations. Cheerful and beautiful she fights for those close, especially in situations where she can prove her multiple talents.

People are naturally drawn to the Aries Rat woman and she exudes confidence and elegance. She most often chooses to follow a methodical approach but her ideas are anything but ordinary.

A seeker of financial success, she will know how to dose her effort and will be persistent in her endeavours. She is very demanding of her partner and is hard to impress in her search for someone just as strong as her.

This woman hates to compromise and would happily give up on something she invested years of her life in, rather than do something she doesn’t want to.

With a bold and independence loving character, you can never be bored in the company of the handsome Aries Rat. They often find themselves in the centre of everyone’s attention but are not always the most caring with their closest.

This is a frank man, preferring to act as he sees fit. They will provoke and compete for whatever goals, just to show their willpower and determination. Be in their company when striving to overcome difficulties and you will learn a life lesson.

Deep inside, the Aries Rat man can be very emotional and interested in what others think about them. He will idealize people and situations and will try to get to the essence of people he is interested in.

These men are friends for the better and the worst but will also quickly change tactics if offended. They can be demanding and do exhibit leadership qualities.

Insightful Analyses Into What It Means To Be An Aries