Aquarius people born in the year of the Rat are industrious and sharp. They have a bubbly and social personality and will put a great deal of their life in line for their communities. They make friends easily with their agreeable character and will avoid conflict at all costs.

The Aquarius Rat always likes to do things their own way and will seek to become independent from their family at an early age. This doesn’t mean however that they are not of amazing support to them, through better or worse. 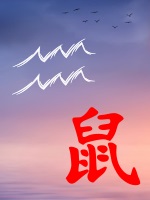 Loyal and honest in all life matters, you would not be sure whether you want the Aquarius Rat to be your colleague at work, your partner in love or both.

These people are highly versatile and emancipated, they know everything that has come up new, in arts, technology and beyond.

Deep inside they are not as eccentric as they appear on the outside but it is only those close who get an insight of this.

As a water element, these people are always in emotional turmoil, keen to see things to completion and keen to understand what makes others tick.

Although not major fans of travel, they cannot be pin pointed in one place so will often relocate in life. They may even decide to follow the love of their life somewhere at the other end of the world, without a flinch.

Because they set the bar so high, they are often very busy and during their young years they will work a lot, perhaps a little bit too much, so that they mature very early.

They are resilient and diplomatic so you won’t see them complaining too much, though. When they are on an ambitious streak, they could achieve results beyond all expectations.

Should they enjoy public speaking, they could become very good orators and motivators. Their words transmit a lot of passion but sometimes, they are too introverted to take this further.

On the other hand, these people hate being lonely and will tend to surround themselves by a large group of friends.

They are great at listening so they can be amazing confidants. In return, you will need to follow at least some parts of their advice, in order to humour their egos.

Temperamental at times, the Aquarius Rat will work tirelessly on anything that can help other people and produce a real change in the lives of their peers. They crave to leave a unique heritage behind them, some way or another.

Devoted in surfacing the truth, they will seek to investigate and uncover the deepest of secrets, perhaps sometimes ending up meddling where they don’t necessarily belong.

Stubborn and perhaps too reliant on their independence, these people may prefer to work on their own at times and this may seem offensive to their peers.

Finding it hard to relax, the Aquarius Rat will require many days off to manage to get their batteries recharged.

Full of charm and imagination, these people will persuade their love interest to follow them in the craziest plans. It is not unheard of an Aquarius Rat eloping, for example.

On the other hand, with a rather sensitive mood and an anxiety inducing way of making scenarios, these people put themselves as great stress when trying to figure out if someone fancies them or not.

Flirty and passionate, they may run around but will eventually settle with someone stable. They happily trade adrenaline and lust for security and trustworthiness.

Even when happily settled, their need for independence may surface thus putting them at risk of conflict, because, let’s face it, what partner wouldn’t start doubting you if, all of a sudden, you become rather distant.

Most compatible with: Gemini or Sagittarius Ox, Libra Dragon, Aries or Libra Monkey.

A highly practical and sociable being, this woman is a hit amongst her friends when it comes to crafts and organizing. She is a star at planning and won’t be phased by any obstacles. Ready to adapt to any changes, she doesn’t take long to concoct a new action plan.

She is most often surrounded by friends and it is like a second nature for her to connect with people. Loving and empathic, she invests a lot in those dear to her but also has her own moments of selfishness.

The Aquarius Rat woman is disciplined from an early age and sort of traditional, she enjoys following old rules and prefers a routine for most days. She will however challenge anyone who tries to change her in any way.

A justice seeker, this man prefers to put his life in the support of others, especially people he doesn’t know. He is empathic and a great judge of character so he won’t be cheated in his choices.

He is rather impatient and will often act on impulse. He is not pretentious and not interested in material aspects. Very critical of their own character, they will try meditation and other means to understand themselves better.

The Aquarius Rat man is composed however, and will avoid conflict at all costs. He can have a calming effect on the most agitated of people.

From an early age, they may be controlling with those dear to them, in an effort to protect them. This may translate into a possessive behaviour in relationships and even a choice not to have children.

Insightful Analyses Into What It Means To Be An Aquarius